What is Acceptance and Commitment Therapy?

ACT (pronounced “act”) is one of the therapeutic approaches which has developed as a “third wave” of CBT (cognitive behavioral therapy). CBT works to support people in changing unhelpful, distressing thoughts into more rational, less distorted ones. (Please forgive this incomplete description of CBT.) ACT also works with thoughts and behavior, but focuses more on a person’s relationship with their thoughts and emotions, and less on their content. ACT emphasizes not taking literally unhelpful private language. For example, it is not useful to take the thought, “I am bad” literally. Yet when this thought appears, we often believe it. Our minds can be very convincing! But of course I does not equal bad. I am not the walking personification of bad. What may be more workable is, “I am having the thought that I am bad”. The connection in our mind with badness is going to come up again and again (have you ever been able to turn off an unwanted thought?). But instead of struggling against it or working to change it, what would happen if we let it be there like a set of keys on the passenger seat? Can the thought be there and you still be the one in the driver’s seat determining the direction of your life?

ACT seeks to expand and enhance psychological flexibility, which can be explained as acting in the direction of your values while being aware of the present moment and noticing thoughts and feelings without necessarily letting them run the show (or take the steering wheel).

These six components are sometimes illustrated as points on a hexagon, dubbed the hexaflex, a playful way of describing how these six components are not separate steps, but rather elements that make up a fluid dance called psychological flexibility. That’s a strange name for a dance, but just go with it. ACT often uses metaphors that allow us to relate to an idea in less literal or fixed ways, (and I find I often mix my metaphors, as you may have noticed.) 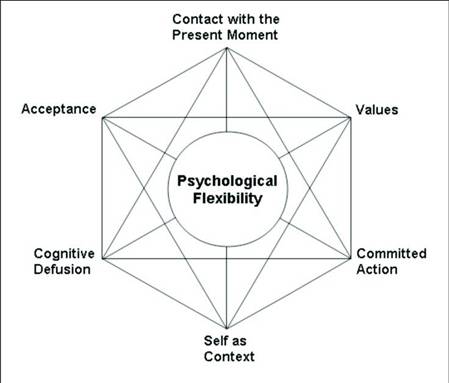 ACT’s primary aim is not symptom reduction (though symptoms often are reduced through treatment). Instead, treatment in ACT targets unworkable behaviors, which are taken to avoid unpleasant and unwanted emotions and thoughts. ACT asks a big question:

Given a distinction between you and the stuff you are struggling with and trying to change, are you willing to have that stuff, fully and without defense, as that stuff is, and not as what your language says it is, and DO what takes you in the direction of what is vital and meaningful at this time, and in this situation?

If the answer is “yes”, that is what builds psychological flexibility (Hayes and Smith, 2005).

Now back to our old acquaintance, Badness, or the thought that “I am bad”. We can better engage a stance of interest and curiosity about this thought if we can notice that it’s there in the first place (connecting to this moment); not take it as literal truth (defusion); let it be there along with any of the emotions or physical sensations that come with it (acceptance); notice that you’ve experienced this thought many times in your life (self-as-context); decide what really matters to you (values); and take a step in that direction (action). This might sound clunky when described this way, but with practice it can become an elegant dance step.