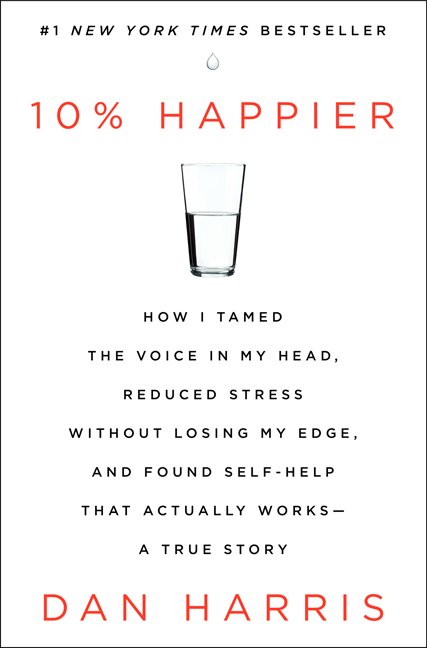 Most people whose lives are filled with stress and anxiety don’t get to meet the Dalai Lama, Deepak Chopra or Eckert Tolle, author of The Power of Now.

TV reporter Dan Harris of Nightline and the weekend edition of Good Morning America got to interview all of these spiritual giants, having access to them one-on-one thanks to his beat as a religion reporter.

The interviews were professional, but his reason behind meeting these models of personal peace arose from his own lack of serenity. His lifestyle of constant stress, the frantic world of breaking news, reporting from war zones, complicated by drug use, led to a wake-up call.

Harris had a panic attack on live television in front of five million viewers.

He knew something had to change, but like many of us, he didn’t know how to change his life, or even exactly what he was searching for.

Meditation Can Help Even the Skeptical

His search is documented in the book, 10% Happier: How I Tamed the Voice in My Head, Reduced Stress without Losing My Edge and Found Self-Help That Actually Works, published in 2014.

Harris was critical of everyone who had discovered some secret of inner peace – at least at first.

He was only slightly interested in the insight from Eckert Tolle: “Make this moment your friend rather than your enemy. Because many people live habitually as if the present moment were an obstacle they need to overcome to get to the next moment. Imagine living your whole life like that, always this moment is never quite right, not good enough because you need to get to the next one. That is continuous stress.”

That made sense to Harris, but it didn’t help him tame the voices in his head enough to stay in the “Now.” By the voices in his head, Harris doesn’t mean “hearing voices.” He means just the usual “internal narrator that …makes us reach into the fridge when we’re not hungry…is fixated on the past and the future to the detriment of the here and now…makes us lose our temper…and has us pruning our inboxes when we appear to be engaged in conversation with other human beings.”

Eventually, all roads, or coincidences, or suggestions, pointed Harris to meditation. After a year of struggling through the agony of sitting still and following his breath, he relents and goes to a 10-day silent meditation retreat.

His skeptical and judgmental nature kicks in as meets his fellow meditators: “The outfits aren’t helping in this little zombie jamboree. Many of these people seem to be cultivating an aggressive plainness, and in some cases, a deliberate oddness. Their clothes are often mismatched or several decades out of style. One guy is wearing pleated, acid-washed jeans.”

Despite his negativity, scathing judgments and resistance, Harris eventually comes to respect the teachers and meditators he initially criticized. He finds some slowing down of “monkey mind” and discovers within himself more patience and compassion. While it’s not 100 percent, Harris figures he’s 10% happier. That’s a positive change and enough to build on.

“I know that widening my circle of concern beyond my own crap has made me much happier,” says Harris. “Meditation has made me much less reliant on unstable and constantly changing external circumstances. My happiness is much more self-generated.”

Whether or not you end up meditating, Harris’ adventures along the way are fast-moving, funny and eventually serious and insightful – a reminder that whatever our issues or demons, we just have to keep going, step-by-step, sometimes grasping, paying attention to signposts on the path to inner peace.

Anxiety Experiencing occasional anxiety is a normal part of life. However, people with anxiety disorders frequently have intense, excessive and persistent worry and fear about everyday situations. Often, anxiety disorders involve repeated episodes of sudden feelings of intense anxiety and fear or terror that reach a peak within minutes, as in panic attacks.

These feelings of anxiety and panic interfere with daily activities, are difficult to control, are out of proportion to the actual danger and can last a long time. Symptoms may start during childhood or the teen years and continue into adulthood.

Common anxiety signs and symptoms include:

The two main treatments for anxiety disorders are psychotherapy and medications. Many people benefit most from a combination of the two. It may take some trial and error to discover which treatments work best for an individual.

References:
Harris, Dan, 10% Happier: How I Tamed the Voice in My Head, Reduced Stress without Losing My Edge and Found Self-Help That Actually Works, Harper Collins, 2014.