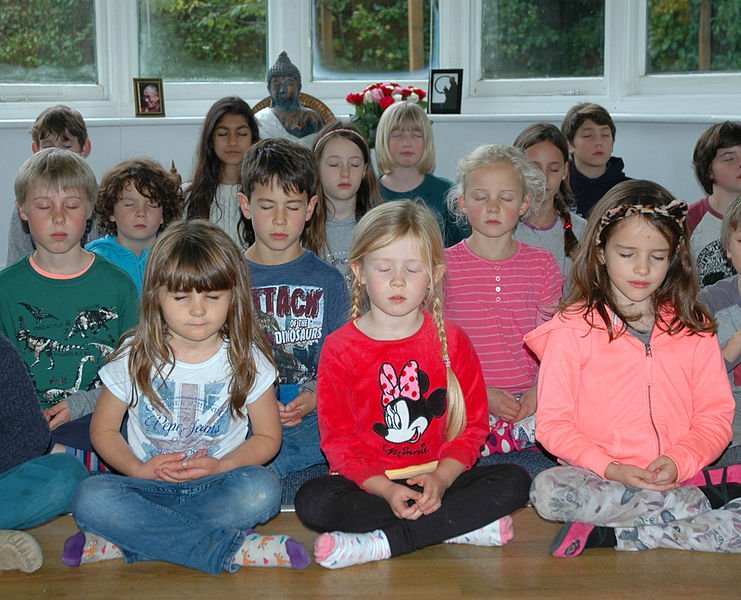 Mindfulness in School to Improve Concentration

Mindfulness for Students Can Improve Concentration and Regulate Emotions

The waterfall of mindfulness training that’s pouring into sports, the military, mental health therapy and business has dipped down into younger generations.

Mindfulness is in schools.

Mindfulness meditation is the practice of quieting the mind to bring awareness and attention to the present moment. It’s increasingly being used in schools around the world as a tool to improve student well-being and enhance academic performance.

Educators are increasingly embracing the idea of starting early to teach children mindfulness to help them concentrate better, regulate their emotions, and in some cases, perhaps tone down the fidgety-ness of Attention Deficit Hyperactivity Disorder.

Two school teachers, Richard Burnett and Chris Cullen, who were also practitioners of mindfulness, launched the Mindfulness in Schools Project in the United Kingdom in 2009. Their vision was “to improve the resilience and well-being of all young people to enhance their school career and to support them throughout life.”

Initially, they created the curriculum for 11-to -18- year-olds. Teacher training for the program has been done in Scotland, Ireland, the U. S., Canada, Finland, Thailand, the Netherlands and Australia; the curriculum has been translated into Danish, Dutch, Finnish, Icelandic, French, German and Spanish.

How Mindfulness Works in the Classroom

It starts early in some schools. In a primary school in Brighton, England, children close their eyes and breathe slowly.

“Where did your mind go?” the teacher asks. Angel was thinking about her mum going into hospital that day for an operation. Jose was looking forward to his sister’s birthday party at the weekend. Daniel’s mind was on lunch.

“Were you able to let those thoughts go and come back to your breath?” asks the teacher. They all nod confidently.

Classrooms full of teenagers are a prime destination for the calming and well-being that can be gained from mindfulness.

In a New York City high school for students who have dropped out and have come back to work toward graduating, the teacher rings a Tibetan meditation bell.

He has been trained through the Mindfulness in Schools Project and guides the students: “Take a deep breath into your belly. As you breathe in and breathe out, notice that your breath is going to be stronger in a certain part of your body. Maybe it’s your belly, your chest, or your nose. We’ll begin with trying to count to 10 breaths.”

“If you get lost in thought, it’s okay. Just come back and count again. Whether you get up to 10 or not doesn’t really matter. It’s just a way to focus your mind.”

Results of Mindfulness Training for Students

Many different programs, in addition to the Mindfulness in Schools Project, are being brought to classrooms for students from preschool through college.

Scientific research illustrating the positive effects of mindfulness training on mental health and well-being is becoming well-established. Mindfulness is being shown to improve attention, reduce stress, create better emotional regulation and even expand the capacity for empathy and compassion.

Mindfulness is widely considered effective in psychotherapy as a treatment for children and adolescents with aggression, ADHD and anxiety. Mindfulness techniques can be used along with support from a mental health professional, thereby increasing the potential success of the practice for young people.

Perhaps, as the young people grow to maturity, they will feel the wisdom of the Vietnamese Buddhist monk Thich Nhat Hanh, from his book, Peace is Every Step: The Path of Mindfulness in Everyday Life: “The present moment is filled with joy and happiness. If you are attentive, you will see it.”