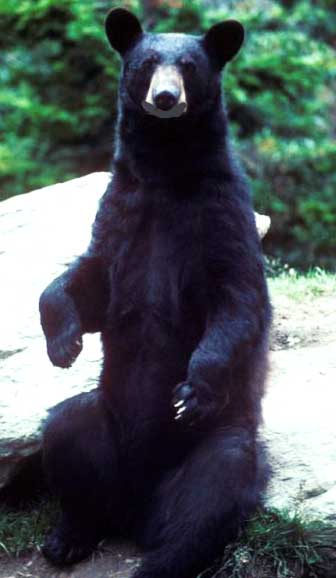 The bear cub, the one with the splayed foot didn't know how long she had been walking. But she knew she was lost. The rich sweet smells of Huckleberry and Pine were faint and far on the horizon but diffuse and so hard to locate exactly.

The deep green scent of Oak, Spruce, Evergreen and a dozen kind of wild grass might have been intriguing to her, even intoxicating in their beauty, but not now. Now all elements of those feelings were being pushed mercilessly and completely out of the way by the animal which had affixed itself to her back....Fear.

"Where am I?" How did I do it all wrong?" Momma will be so mad, I'm so stupid, all the others did it right. My lame foot and my lame mind have failed me. And I am alone. And what if I am always so? What if I die here, here in these unfamiliar woods surrounded by creatures I do not know and who do not know me. Am I even a bear? I have not even done the bear things that bears do. Maybe I am being punished, but for what I do not know.

I am tired. I am tired. Tired of fear and the constant rustlings of my mind and the voice that tells me unendingly of what is not possible and what is to be feared and worst of all, what is to be ashamed of. The bear looked at his deformed foot, the locus of his shame. The burning hot center of his unfitness. "Could I chew it off? Could I be free of it forever. Would I be a hero for destroying the thing which causes so much embarrassment and humiliation? Would the others see me differently, love and accept me for my courage? Perhaps they would?"

The bear considered his foot, observed the skewed contours and hard angles. He saw how narrow the wrist was and how thin the bones were. He had fed well before getting lost and his strength was up......."I could do it. I could gnaw through this and be done with it forever" He sat very still and waited......and listened.......for what? Encouragement? A sign? But.... there was nothing. Nothing but the gentle creek passing in a quiet rush just below him, and the chatter of the squirrels and chipmunks. The sun had broken out over him above the trees and he opened his chest to its warmth. "This feels good" he thought. This sun, this creek, these squirrels and chipmunks and......me. I feel good here. And he began to think that he hadn't really wandered off the path too far, and that probably his mother was looking for him and that her smell was so much stronger than his. She could smell out anything. And that hadn't this same thing happened to another cub just recently? Yes. It had indeed. And it was ok. And the bear knew it was all going to be ok.